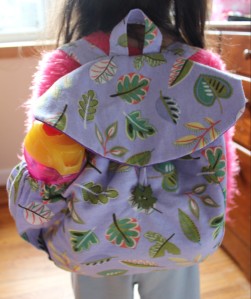 First of all, this isn’t my design.  And it isn’t a tutorial.  I promise I am not going to do any stealing in this post.

Today I bring you a very long post, with pictures, on me obnoxiously bragging.  I’ve just finished making a little backpack for my 3 year old little sister, who has just begun attending preschool.  It has taken my 4 whole months to get this little thing finished, and I have to say I am quite proud of the results.  Isn’t it cute?  I know it is.  But that credit cannot go to me, it has to go to Beckie at www.infarrantlycreative.net .  The original tutorial is here, and you better go visit it, because it is just the cutest and most genius little backpack ever!

Now.  About the taking four months to make this thing.  I have an excuse!  I don’t have a sewing machine.  Yes, I can already imagine many of you emitting gasps of horror, but I do not own a sewing machine.  So I had to do all of this by hand, while juggling schoolwork, two instruments, preparing for a craft fair, and holiday gift-making at the same time.

Another huge disadvantage of not having a sewing machine is that all of my stitches turn out large, ragged, and generally not very strong.  Even though this backpack hasn’t even been in use yet, I’ve had to make two repairs where stitches have already failed.  However, it has already withstood 24 hours of my sister, so it should be okay.

Even before she started preschool, I was thinking about making my sister a backpack, because her existing one was, in my opinion, very ugly and not very useful.  I searched up several backpacks, and narrowed it down to either this cute circle backpack, or the one I ended up making here.

We took my sister to Jo-Ann, where we helped her pick out two different fabrics.  She had specifically told us that she wanted a purple backpack, so we chose a solid purple canvas for the lining, and my sister picked out a light purple leaf pattern for the exterior.  I actually had my eye on a different pattern, but she insisted on this one.  We also picked up some green bias tape and leaf buttons.

The going was pretty slow.  I would finish a large chunk of the backpack in an hour, then forget about the whole thing for a month.  Periodically, my sister would urge me to get going on her backpack again.

However, I finally did finish, and my sister is now very happy with her newest accessory!

I did make some edits from the original tutorial. 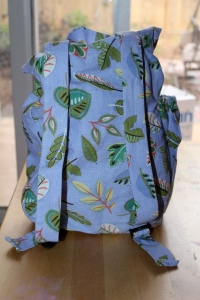 Instead of using four different sections of straps and a D-ring, I just used two full-length straps and attached a typical backpack’s buckle on each end.  That buckle had to be attached rather messily with long stitches.

The buckle actually just comes from another old, discarded backpack. 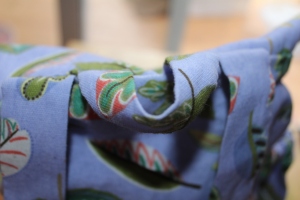 On the top, the straps were just sewn in, along with the handle. 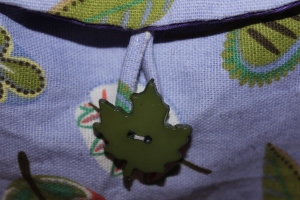 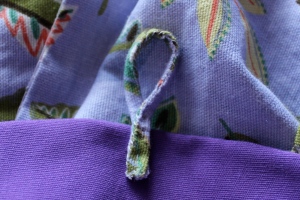 Instead of a magnetic snap, I used just a little loop and a leaf button.  However, I forgot to attach the loop until after I had already sewed the flap, so I had to sew it on the outside, as shown in the picture on the right. 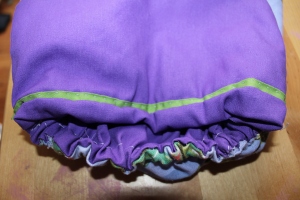 When sewing the flap onto the main pouch, I was afraid the hem of the flap would wear down over time, so I sewed a strip of bias tape over it.  I think it looks nice anyway.

The difficulty level of this backpack was not too high, so I would even suggest it to someone who has never completed a big sewing project before.  And it definitely doesn’t hurt that the backpack itself is adorable! 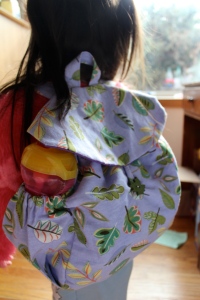 I really recommend this tutorial.  Please visit the original so I don’t feel guilty of stealing!